Some astronomical images taken from my backyard observatory:

The link to the images.  Some okay, some require a better night.

I'm active with astronomy and imaging since 1997.  Since 1996, I moved four times for my work. In 2009, I settled in the northern part of the Netherlands. The skies are reasonably dark here, sufficient to do some CCD astronomy with modern cameras.The SQM value in my garden is about 20.4. Imaging is done from my observatory shed in the garden. 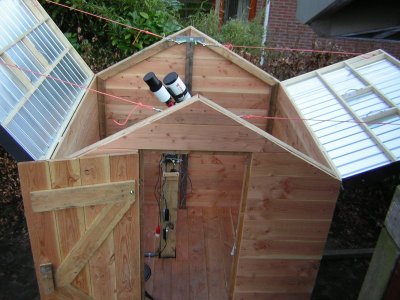 The seeing from this sub urban location is reasonable. The only problem is the rare clear nights. At good conditions on images taken near the zenith, the stars are about 3 to 4 arc seconds wide.

Currently I use four telescopes:

For guiding an old cute Celestron 90mm f/5.6 Maksutov (500 mm focal length)  white spotting scope is used. The optics are pretty raw and not very good, but due to the relative large 90 mm opening, the attached QHY5 mono guide camera finds always a guide star. It is mounted with a clamp to the vixen dovetail. It accepts 1.25 inch and the mirror doesn't shift after some settling time. In November 2014 I bought a CLS light pollution filter. Here some CLS filter test results

In 2017 the focuser was  motorised  to cope with the focus drift due to temperature changes.
For sun images, a home made filter based on Baader solar film is used: 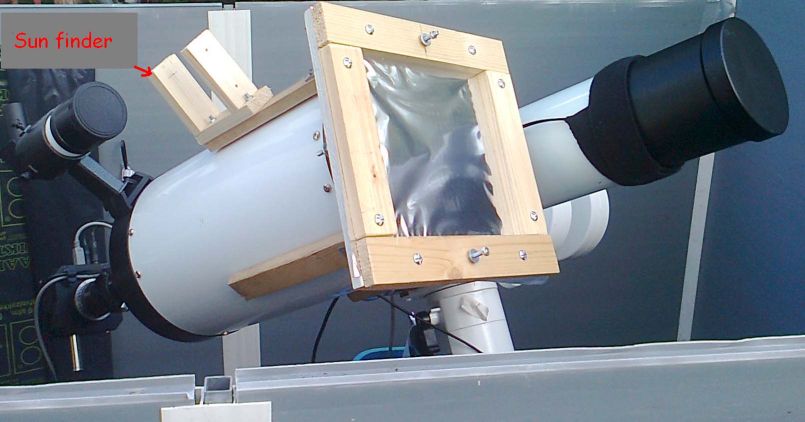 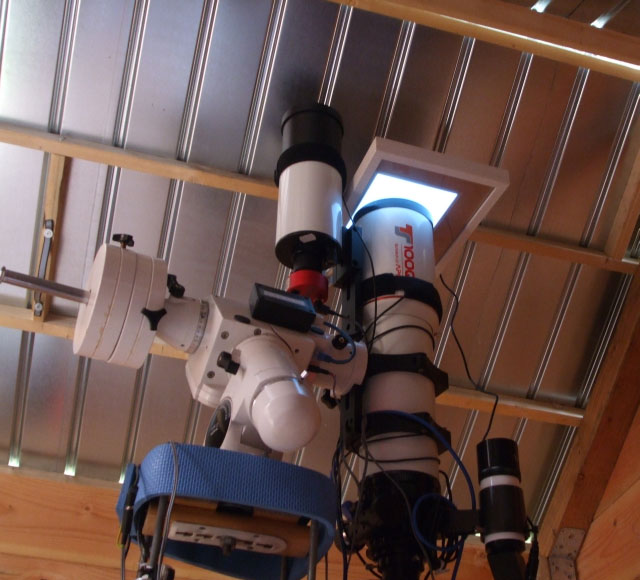 previously I used a light box.

Below some images showing the potential of the APO65Q. Initally the LX200 was used a platform  but now the HEQ5. Better images will come if the weather allows. Sometimes images where made during the moon was shining resulting in more background noise.

The link to the rest of the images.  Some okay, some require a better night.

Below some images showing the potential of the 100Q:

I'm using use a 34 cm long dovetail so that I can mount the guiding scope at the front. It requires some distance rings between the brackets and dovetail otherwise it will touch the dew cap. Adapted 1/4 inch screws not too long are required.

The 100Q is pretty new. There are three reviews available on the web: 1 and translated 2, 3

The link to the rest of the images.  Some okay, some require a better night.

As an experiment I tried the focal reducer CCDT67 in combination with the APO100Q without succes. Stars at the corners become lines like the image is slighly rotated around the center.

The GSO RC6 was tested at the optical test bench of H. Dekker. The optics where fine at the centre after good collimation. Ronchi test showed nice lines and the artificial stars showed a nice diffraction pattern. First astro images however where not successful. After many experiments with the low cost Orion/Skywatcher flattener at different distances, I achieved good results at 72 mm chip-flattener distance (designed for refractors at 55mm). At shorter distance the stars at the corners of the 23x15mm CCD chip become a little elongated like comets. According the literature they should be oval due to astigmatism and curvature. A 1/4mm focus adjustment gave the best focus in the corners but still not a perfect star indicating the amount of curvature . So with a flattener the telescope is performing as desired. Imaging using a focal reducer CCDT67 as recommend by some was not successful even at only 0.8 reduction. It is not possible to use it combined with the flattener since the flattener is too long. Without the the flattener the curvature doesn't go away.

Here my description how to collimate the RC.

- The link to the rest of the images
Two studies I did:

- Counting stars and an empirical formula for estimating the number of stars in an area:

- The brightness (SQM) value of the twilight sky