Astronomical observatory based on a polypropylene garden shed

To house my new telescope mount and computer for some serious imaging, I bought in spring 2014 a low cost "Keter Manor 4x6 shed", floor dimensions 111 cm width by 177 cm long. Maybe it should be called a cabinet since it is a pretty small shed. It is made of weather proof  fluted polypropylene sheets. The main reason for buying this one is that the roof is light (only a few kg) and can be removed manually for an observing session. Secondly the roof is rain proof since it is made out of one piece. The shed has also a floor plate keeping moisture away. The shed stays absolute dry after heavy showers.

A note about this shed. As another customer described: "when you  first open the box you will be slightly traumatized. The material seems cheap and flimsy ...but??.  After assembling it comes together...."  In my eyes reasonable. The width is just okay for my 6" GSO RC to move around freely.  The polypropylene will last long but it is very flimsy. The roof is made out of one piece and absolutely rain tight. The shed is screwed together with metal screws and like a karton box, only after the assembly it gets some strength and hopefully will last for some years. 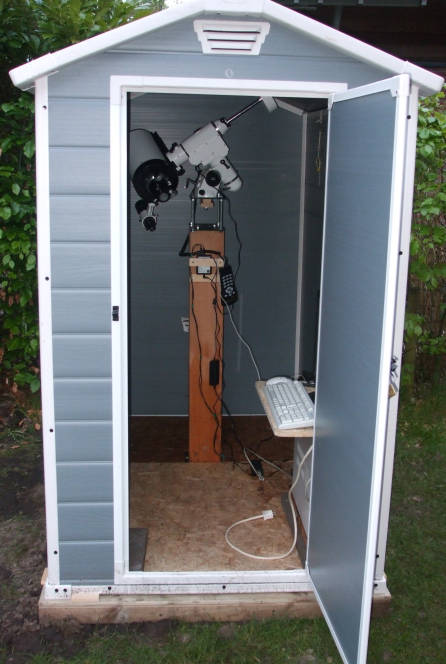 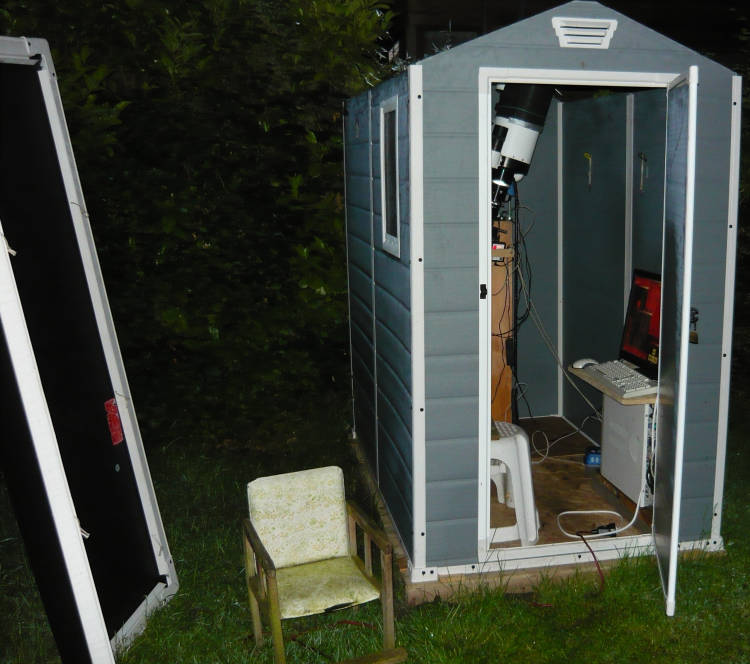 The current setup when the telescope is  installed. For longer periods of poor weather, the telescope will move inside the house. The computer is an old one from 2004.

It took a few hours to dig a 1.25 meter deep hole for the pier. No concrete was used. To allow deep hand digging, the hole has to be made wider and longer to allow shovel access. During refilling the ground was regularly repacked manually using an small pole and soaked with some water. After a few weeks, the stability is about 20 to 30 arc seconds movement when one kg force is applied to the top of the pier. The stability is fine for me. 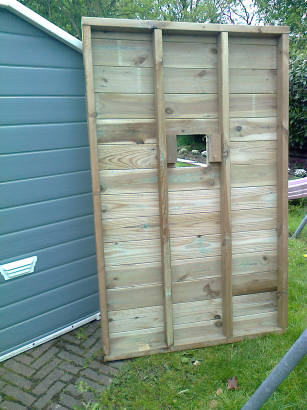 For stability, a platform/base was made from pressure treated wood to support the wobbly shed floor. Without a stable wooden or concrete base the shed will quickly break. A raised floor will also protect against flooding during heavy rain not uncommon in the Netherlands. 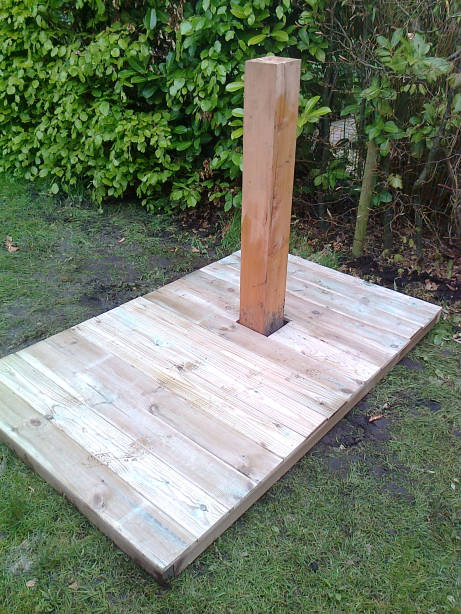 With the 150 mm x150mm , 2.5 meter long "douglas" wooden pier installed. The shed was assembled (screwed) separately. A square hole was cut in the floor and the shed was lifted by three people 1.5 meter high above the pier and then lowered on the base. 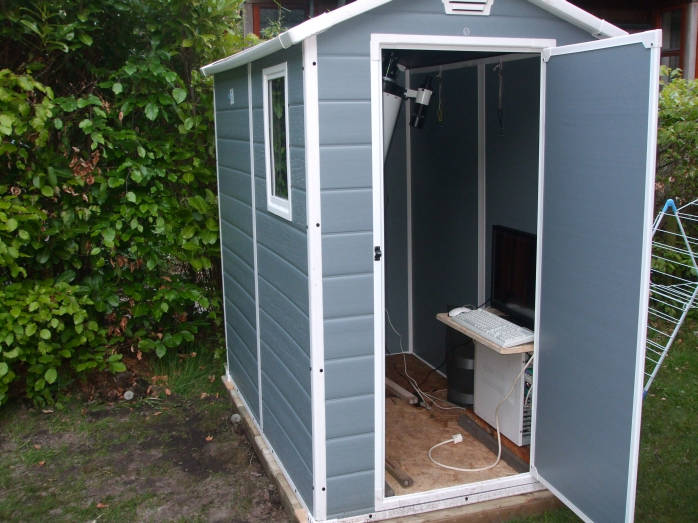 Note the extra installed wooden OBS wooden floor due to the very weak polypropylene floor. The floor is very weak.  Sharp ends falling down tends to puncture the floor. The extra wooden floor will spread the load of me and the equipment and add weight together with some pavers/bricks to secure the shed against storms. The walls do not support any weight. A small wooden plate on top of an old but strong PC functions as a small desk. The PC itself is raised with bricks and some wood to a comfortable height. A wifi link allows remote control from inside the house using Windows "remote desktop" feature. Initially a power extension cord was used to power but later a permanent connection was made. An extra earth rod was placed and connected as an extra  precaution. The power cable simple run through the ventilation hole in the back wall. 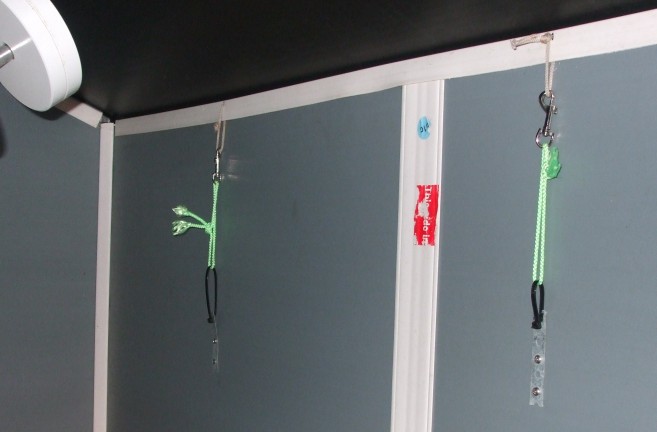 The roof is not screwed as intended, but hooked at nine places to the walls using small "snap hooks: and some tent rope. The white U form fits pretty tight, so it needs to be bend very wide open once to allow easy remounting after a night of imaging. The original supplied plastic knife is still used to assist the remount. Removing of the roof takes less then one minute. Mounting takes about two minutes. 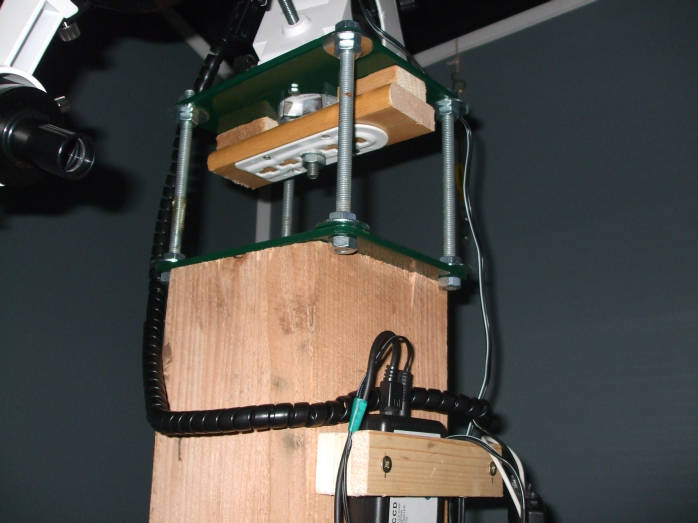 The HEQ5pro pier top is based on two thick steel plates, 200 x 150 x 6 mm. The two retangle plates including the main 60 mm hole for the HEQ5 Pro where ordered at a local machine shop for Euro 43. Further drilling, machining and painting was done at home to save costs. The bottom plate is screwed with four "lag bolts" to the pier. To prevent the wood splitting, the holes for these bolts where predrilled and placed not to close to the sides.

The telescope and mount after the roof is removed. Left the GSO RC  6" on the HEQ5pro mount. Right the Imaging star 100Q APO. An old Celestron 90 mm F/5.6 Maksutov is used for guiding: 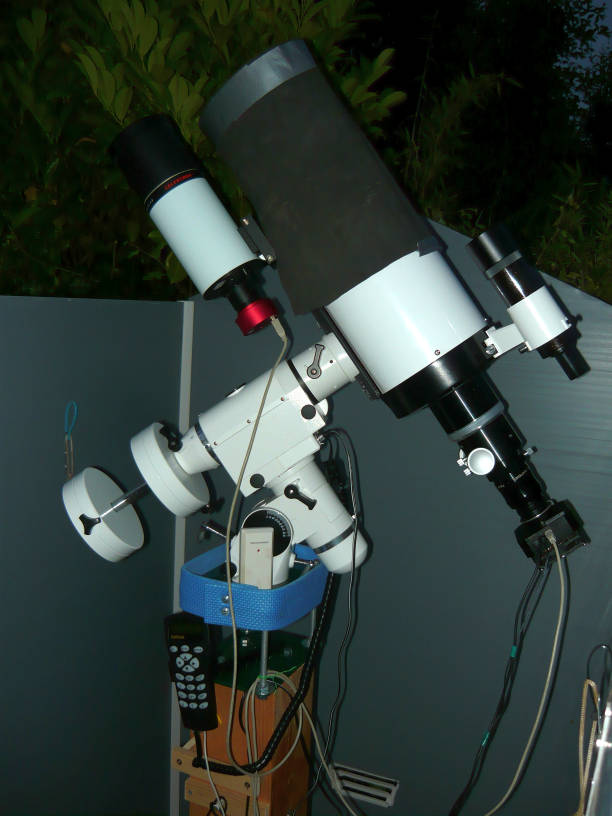 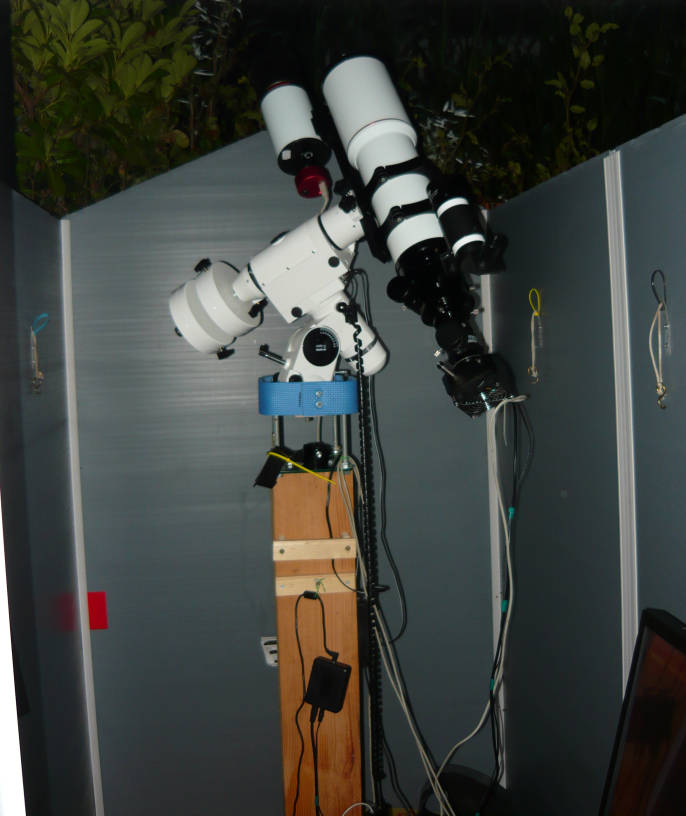 Building the shed took one holiday week. Total building material costs where around Euro 500,- I'm still happy with the shed after 18 months use. The is a slight deformation in the top of the front and back wall but not seriously. Maybe after a few years, I will build it a little bigger wooden "batwing"design shed using light weight fluted plastic sheets for the roof cover.

Note the extension tube of the GSO RC is now removed and distance between flattener and CCD chip is increased 72 mm.

December 2014, due to the high humidity everything was get soaking wet in the early morning hours. I have now two dew heaters 12v 8 watts innstalled for the main and guiding telescope. Without it, after 6 hours or so imaging, the optics facing the sky become so cold that dew starts to form on the optics.

In April  2015, I added an additional earthing of the 12 volt DC minus pole (outer connection  power supply) of  the two switching  power supplies in use.  Both introduced some very low energy but the high voltage which was starting to irritate me giving  me a very very light electrical shock while switching USB cables  A screwdriver with a main supply neon light tester was lit by the 12 Volt DC power supply outlet only!!! This indicated high voltage leak which is not uncommon for these power supplies. A multimeter could not detect it. As an extra precaution, I hammered in the outside ground an extra 80 cm grounding and connected it using electrical equalizing line to the computer housing and minus of 12V  DC connections. The mandatory electrical earth from  the 230VAC power supply  was already  in place however I did  found a loose connection inside the living room of  the house.

Cables to the pier are wired through a 50 mm PVC tube bolted to the ground plate for tidiness.

Similar use of the same shed by other users:

In 2017 this design was replaced. It was performing fine, but I liked to have more space and a stronger building. See link below.