Pictures made with ordinary camera.

This is a picture of the famous andromeda galaxy. This the easiest and brightest galaxy to capture on film. It has a magnitude of 3,5 and a size of 180 minutes. Through a telescope it looks like a white mist. Only on film the galaxy the structure become clearly visibly.

This one is made in direction Bruehl, Germany. As a basis for my 35 mm camera the simple timer platform was used.

This one of Hale Bopp was made in the Eifel where the sky is dark enough. Also here the simple timer platform was used. 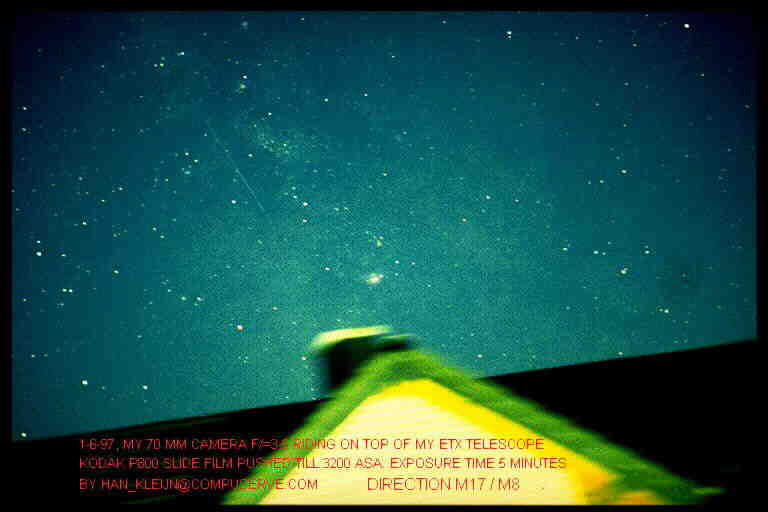 The stars are roughly a point and the house of the neighbours is moving. 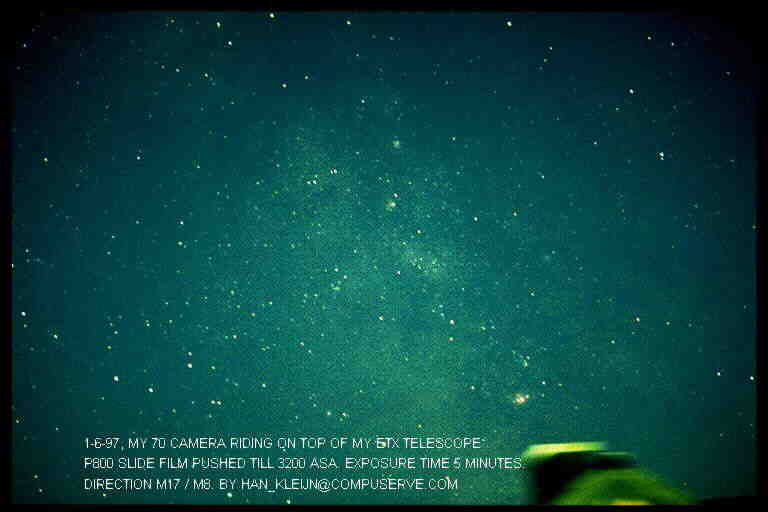 Here are some CCD picture (August 2000) made with a 60 mm  F=/2.0 camera lens. After some time I found out (as many others) that for the sharpest picture the lens should be not fully opened. So diafragma set at 2 or 1.8 for me.

Here are some more result of a 58 mm and 135 mm camera lens and Alpha-Mini CCD riding on the LX10. The lenses are F/2.0 and F/2.8 but the diaphragm and reduced to about f/4 to get nice point stars.

A tried to combine several CCD pictures, but the results where first disappointing. The stars tend to spread out larger. Later I found out the combining only works if the exposures are from the same series using the same guide star. If not, adding is possible but due to distorsion of lens and rotation and so on they do not fit perfectly. Personally I prefer single exposures but the light pollution is large here. The CCD is overloaded for exposures longer then 3 minutes (f/4). Visually, I can see stars till magnitude to about 3.5.

M45 or pleiades, You can see faintly the (normally blue) nebula around the stars.

NGC1499 or California Nebula. This is a combined image. The result is almost the same as a single exposure except that the nebula becomes less grainy.